You have 0 Documents collected. Go to My Documents

In the very southwest of the British isles lies the fishing town St. Ives. With its great beaches and several art galleries in the town it is a popular holiday destination as well as an important art and cultural centre in England.

The town council of St. Ives was very concerned about the risk of flooding for the town centre, particularly so because of the steep roads that lead down into the centre of the town. The memory of the devastating flood disaster in the neighbouring Boscastle in 2004 gave extra urgency to the plans for a new drainage system. The experts felt that the existing standard road drainage system would not be enough to handle the water quantities occurring during extreme rainfall events. For this reason, a drainage system with a very large hydraulic capacity was considered as the ideal solution.

Slotted channel systems were not taken into consideration because it was feared that the inlet slots would not be sufficient to cope with the large quantities of water accumulating on the steeply inclined roads. Instead, the council were looking for a cover with a large inlet aperture. In addition, the application called for a particularly robust channel system that could be installed to prevent the access roads from flooding.

The Local Authority invited tenders for the FASERFIX SUPER 500 channel made from fibre-reinforced concrete because it offered the ideal solution for all requirements: an extremely robust and rugged channel with a large drainage cross section and heavy-duty cast iron covers of class E 600 for heavy load applications. These covers feature 3 parallel rows of slots, each 20 mm wide, and can therefore cope with very large quantities of water.

The building contractor, Carillion Construction, installed in excess of 100 meters of FASERFIX SUPER 500 channels in various places in order to ensure effective flood prevention. Now the town centre is 'safe and dry'.

The project was supported by technical sales engineers Andy Beirne and Steve Wiseman of HAURATON England who gave theoretical and practical advice during the design phase and during installation. The local Building Control department, planners and the building contractor were full of praise for the good cooperation and the flexible service. 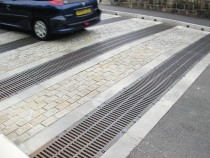 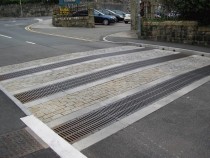 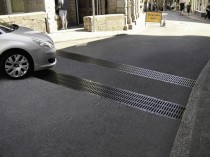